There Was A Woman With An Issue.... REALLY...ONLY ONE?

Well lo and behold here I am again! Several people, who love me enough, have had the guts to tell me the truth and basically said, "Dust the grey off sister and get with it! There's no turning back now! It's too late - you've been seen!"

As I said in the first Blog, the Bible encourages us to know those who labor among you, and as I promised, I am about to reveal more on the subject of ..."Who is this yady?" So I invite you to venture off into another episode of Cathy's Life.

There was a woman with an issue...REALLY NOW...ONLY ONE?  Have you ever known a woman who had only one issue? I would like to shake her hand.


**I understand that I am taking poetic license with this verse and this cartoon.  I did not draw the cartoon below, but I wish I had.  I just rearranged several clip art images to make my point.**
Sorry..interruption... break... this reminds me of a joke!  A young lady named Jane was in an accident, died prematurely, and went to heaven. When she realized she was in heaven and standing in front of St. Peter she started crying hysterically and pleading her case - declaring that she was too young to be there.  Jane relentlessly begged St. Peter, "Please, Please, Please give me another chance." She rashly listed the things she would do differently, and promised to make the world a better place if she were given another chance.

Sure enough, Jane was given a second chance.  Immediately, she had plastic surgery from her head to her toes. Jane had her hair cut, styled and colored differently - new make-up -new clothes.  After all, if she were going to accomplish all of these wonderful feats, she needed to look her best. 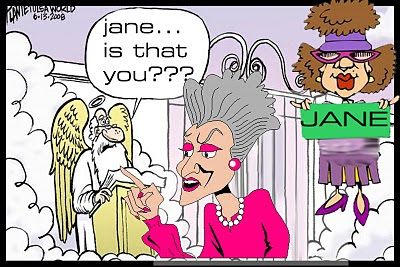 Just as Jane added the last finishing touch she walked out of the beauty parlor into the street only to be in another fatal accident.  She awoke once more in the presence of St. Peter. Hysterical she started screaming...BUT YOU PROMISED!!!...YOU SAID I could go back and accomplish all these great things for you!!!  St. Peter kept eyeing her suspiciously, he knew she looked vaguely familiar.  He leaned over, looked closer and said, "Just who are you?" Jane started screaming, "IT'S ME JANE - JANE - YOU KNOW - DO YOU REMEMBER  ME NOW?" Stunned, St. Peter hung his head and said, "Sorry, I didn't recognize you."
This little tale would be funnier if it were not so close to the truth, at least in my own life. It's only by the grace of God that we escape so many near disasters. Out of great desperation we make rash vows and promises... if only God will save our necks this time. Then we promise to clean ourselves up and save the world. We get so caught up in our own agenda and self-preservation we are barely recognizable from the desperate, humble person that first threw themselves on the Lord's mercy.

I very easily could have been numbered with these women in the 'HALL OF SHAME'.
I was the woman at the well of John 4:7-26. The Samaritan woman was always looking for A man, until she found "THE Man, JESUS!"  Jesus delivered her from the need to base her happiness or self-worth on external relationships.
I was "Mary Magdalene" of Luke 8:2. Mary ministered to Christ, although, she had been delivered of seven evil spirits and infirmities! Greek - as-theni-ah - feebleness of mind or body, malady, frailty, weakness.  Have you been disqualified by society, or your family?  Has the doctor diagnosed you a manic-depressive, emotionally unstable? Have you actually experienced or almost experienced a nervous breakdown or tried to commit suicide?  So what! Jesus still needs your ministry and NOW you are qualified!
I was the woman with the alabaster box of Luke 7:36-47.  "And behold a woman in the city who was a sinner.  Therefore, I say to you, her sins which are many, are forgiven, for she loved much."
I was Gomer of Hosea 2:13.  She decked herself with earrings and jewelry and went after her lovers.  Then she forgot me, says the Lord.  Hosea redeemed Gomer from the slave market in spite of her sin.
From my earliest remembrance, Jesus had always tugged on my heart, but I did not understand who it was. I had one major encounter with the church when I was 16 years of age.  This encounter resulted in supernatural experiences that the traditional church could not or would not take the time to explain.  Instead of being embraced and discipled, I became confused, isolated and ashamed.  Consequently, I ran as fast as I could from the very place I believed should have been my haven of rest.  It truly is a miracle that I ever served the true, living God.
Disillusioned and abandoned, I turned into the waiting arms of the perversion of the Gospel, the Occult.  All the while still loving God the best way I knew how, and believing the lies that He was leading me along this "enlightened path."  I would have never knowingly been involved in blatant satanism, but underestimated the equally destructive power of the "New Age Movement."  Honestly, they embraced me and were much more loving than any experience I had with the church.
I asked Jesus Christ to be my Lord and Savior in 1988. I would read the Word of God, especially, the Old Testament, and just weep. I grieved over the reality of my gross sin, and that my lifestyle had been such an abomination to my Heavenly Father. I felt I had wasted so much of my life and the spirit of regret nearly consumed me. Equally, the revelation of His redeeming love, His abundant grace, and mercy was unfathomable to me. Not only did He guide me into forgiveness of others, but myself, as well.
Oh friends, God is so merciful! Unfortunately, we rarely recognize what tapestry he is weaving with the threads of our circumstances, trials, hurts and tears.
Hosea 11:3. I taught Ephraim to walk, taking them by their arms; But they did not know that I healed them.
v.4 - I drew them with gentle cords, with bands of love, And I was to them as those who take the yoke from their neck. I stooped and fed them.
Once we begin to understand the reasons, and the methods by which we medicate our wounds and pains, there is hope to experience permanent change not only for you, but those you love. We have been sorely misled to believe that deliverance is a onetime event, when in fact, it is a lifetime process.  How often did the Israelites cry out for deliverance? Over and over and over - and God delivered them out of them all!
Prior to my conversion experience I was awakened by the audible voice of the Lord.  I awoke to hearing the name "Hannah". All I knew is that she was someone in the Bible.  I began my search....
To summarize the end of this particular story...through much deliverance, healing, and teaching, God has transformed me into a Hannah.  I assure you this is not a haughty - prideful statement. Although Hannah had opened her heart up to bitterness, jealousy, and was misunderstood by the church, God fertilized the dormant seed.  He watered the barren, dead places. It was only through the bitter, hard places did HANNAH TRULY LEARN TO PRAY!
I was told, by someone in church leadership, several years ago that the reason it was so easy for me to experience the things of the "spirit" was due to my prior Occultic involvement. At the time, I believe that was one of the greatest insults I had ever experienced. I can tell you of a surety, there is NO comparison to the genuine Spirit of God with the counterfeit! Few people know the true cost of the oil in my alabaster box.

As I began to grow in the things of the Lord, I was also told that I prayed with fervency, although, I had no idea as to the meaning. As you recall, Hannah prayed with such fervency, she was accused of being drunk by the Priest Eli.
James 5:16. Confess to one another therefore your faults (your slips, your false steps, your offenses, your sins) and pray {also} for one another, that you may be healed and restored {to a spiritual tone of mind and heart}.  The earnest (heartfelt, continued) prayer of a righteous man makes tremendous power available (dynamic in its working}.


In my ignorance, I cried out to the Lord, "WHERE IN THE WORLD DO YOU GET FERVENCY?"  My Lord very gently said...."Experience my child....experience."

Passage Matthew 7:23. 21 -23"Knowing the correct password—saying 'Master, Master,' for instance— isn't going to get you anywhere with me. What is required is serious obedience—doing what my Father wills. I can see it now—at the Final Judgment thousands strutting up to me and saying, 'Master, we preached the Message, we bashed the demons, our God-sponsored projects had everyone talking.' And do you know what I am going to say? 'You missed the boat. All you did was use me to make yourselves important. You don't impress me one bit. You're out of here.'