It is somewhat of a frightful thing to both commit and yield to the flow of the Holy Spirit whether it is to illustrate-write-or preach. This means you must yield control!
I have seriously counted the cost prior to the start-up of this blog.  I am sure some are thinking...cost - what cost?  I knew there would be the cost of time, the cost of accountability, the temptation to dilute or compromise a hard word. There is always the cost of the fear of offense (real or imagined) or the actual offense itself.
After much prayer, and careful consideration...I felt the Lord gave me a personal word. "On your very best day...there is someone who is NOT going to like you, agree with you, or not speak to you.  So what have you got to lose...your reputation?"  I assure you that issue has been covered as well.
As we study the life of the Apostle Paul, it is sad to learn that even after the Apostle Paul's radical conversion, the majority of the people never trusted him nor forgave him. He  could not win either way he chose. He was  numbered with the vilest of sinners up until his death. The people either carried a direct offense with Paul or still carried the offense for someone he had injured or killed.
Paul could have drowned in his own condemnation and regret.  If anyone had every right to slither under the nearest rock and never come out it was the Apostle Paul. In his personal encounter with the living Christ, he s-o-o-o came to terms with his reputation being destroyed. It was this concept of allowing his reputation to be put to death, that Paul put his own foot on the neck of pride. THIS MADE HIM  BOTH FEARLESS AND TO BE FEARED!
The risk/cost works in both directions - not only for those who carry the Word, but those who choose to follow and listen.
There are several types of followers to consider. The first are those who are excited and desire to be numbered regardless of the cost.
The second group consists of  those, who for many different reasons, will choose to follow from afar.  In some cases the curious will  follow at a distance due to  peer pressure or the very real threat of the fear for  their lives or reputations. All of the men and women of God had "secret"  followers, including Jesus.
As always, we can turn to the Word of God for our examples.
NLT  -  Luke 19:1 - 7 Jesus entered Jericho and made his way through the town. There was a man there named Zacchaeus. He was the chief tax collector in the region, and he had become very rich.  He tried to get a look at Jesus, but he was too short to see over the crowd. So he ran ahead and climbed a sycamore-fig tree beside the road, for Jesus was going to pass that way.  When Jesus came by, he looked up at Zacchaeus and called him by name. he said.   Zacchaeus quickly climbed down and took Jesus to his house in great excitement and joy.  But the people were displeased. “He has gone to be the guest of a notorious sinner,” they grumbled.

I submit to you... that yes, the Word clearly indicates that Zacchaeus was short in stature, but I believe this passage also indicates that this man, weary of all the gossip and accusations associated with his line of business and personal life, made the brave choice to climb above the peer pressure and naysayers in his life.
Then there are the followers who keep their distance out of guilt by association. They fear betraying the person whose offense they are supposed to help perpetuate.
The Message - Matthew 26: 57 -58The gang that had seized Jesus led him before Caiaphas the Chief Priest, where the religion scholars and leaders had assembled. Peter followed at a safe distance until they got to the Chief Priest's courtyard. Then he slipped in and mingled with the servants, watching to see how things would turn out.
Worse yet...after all of the investment of unforgiveness, what happens if you get too close to the fire of  the truth only to discover that after all this time the culprit is NOT who you have believed it to be? THE FIRE OF THE TRUTH BURNS HOTTER THAT THE HEAT OF THE OFFENSE!
Passage Acts 28:3 -6Paul pitched in and helped. He had gathered up a bundle of sticks, but when he put it on the fire, a venomous snake, roused from its torpor by the heat, struck his hand and held on. Seeing the snake hanging from Paul's hand like that, the natives jumped to the conclusion that he was a murderer getting his just deserts. Paul shook the snake off into the fire, none the worse for wear. They kept expecting him to drop dead, but when it was obvious he wasn't going to, they jumped to the conclusion that he was a god!
Lastly, sad as it is true, there are followers who are waiting in the shadows hoping their perceived enemies will stumble, fall, and ultimately fail.
NLT Passage 26:14-16 Then Judas Iscariot, one of the twelve disciples, went to the leading priests  and asked, “How much will you pay me to betray Jesus to you?” And they gave him thirty pieces of silver.  From that time on, Judas began looking for an opportunity to betray Jesus.
There are the followers who first will curse their only hope of deliverance.


Then there are the followers who have lost their hope.......
NLT - Mark 15:40 Some women were there, watching from a distance, including Mary Magdalene, Mary (the mother of James the younger and of Joseph[i]), and Salome. 41 They had been followers of Jesus and had cared for him while he was in Galilee. Many other women who had come with him to Jerusalem were also there.
Then there are the followers that allow their shame and pride distance them from their only source of healing....
Luke 17:12 And as he entered into a certain village, there met him ten men that were lepers, which stood afar off:
There is the last group of followers - those that understand, regardless of the depth of their sin, humbleness, and repentance, removes ALL distance between them and their Saviour!
Luke 18:13 And the publican, standing afar off, would not lift up so much as his eyes unto heaven, but smote upon his breast, saying, God be merciful to me a sinner. 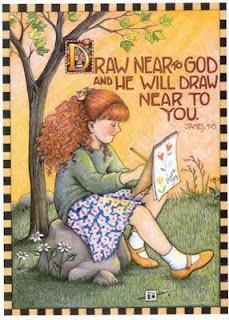 Regardless of what category we find ourselves there is one inescapable truth...
Amplified -  James 4:8 Come close to God and He will come close to you. [Recognize that you are] sinners, get your soiled hands clean; [realize that you have been disloyal] wavering individuals with divided interests, and purify your hearts [of your spiritual adultery].

NLT - Mark 5: 1-8 So they arrived at the other side of the lake, in the region of the Gerasenes.  When Jesus climbed out of the boat, a man possessed by an evil spirit came out from a cemetery to meet him. This man lived among the burial caves and could no longer be restrained, even with a chain.  Whenever he was put into chains and shackles—as he often was—he snapped the chains from his wrists and smashed the shackles. No one was strong enough to subdue him.  Day and night he wandered among the burial caves and in the hills, howling and cutting himself with sharp stones.
When Jesus was still some distance away, the man saw him, ran to meet him, and bowed low before him.  With a shriek, he screamed, “Why are you interfering with me, Jesus, Son of the Most High God? In the name of God, I beg you, don’t torture me!”  For Jesus had already said to the spirit,
One picture is worth a 1,000 words as evidenced by this illustration by Mary Engelbreit!
t-t-f-n (ta-ta-for now!)
Posted by Cathy Summar Flynn at 8:43 PM