Our only grandson will be sixteen years old this month.When he was a toddler and his parents lived in married housing at one of the local universities, his favorite thing to do was go see the 'BIG' truck.

Regardless of where he was or how he was being entertained at the moment, he would hear the beeping sound and know his buddy had arrived. He squealed with delight and would hold his tiny arms up for the closest tall person to either take him to the window or outside. 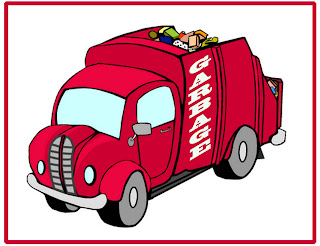 Little did he know or care that it was the 'GARBAGE' truck, already laden with the day's earlier trash pick-ups and more stops ahead. He didn't know you had to hold your nose from the rotten stench of decay. All he knew was that he was fascinated and excited when he heard the beeping. In his tiny mind it appeared to be much different, bigger and better than anything he already owned. There was no amount of strategy that could convince this headstrong bundle of cuteness that to get very close to this type of truck could ultimately harm him. At the end of the day, even being a new 'GARBAGE' truck doesn't change its' purpose.

If we had any idea what was contained in the next load the 'dump truck of life' was backing into our driveway  I am certain, that given the opportunity, we would run for the border.

The Book of Job is synonymous with suffering. Job had no inkling of how many dump trucks had been dispatched to his address or that one of them had the death sentence for his children or the battle for his flesh loaded on board. Job 3:26

You cannot have the kind of favor, wealth, notoriety or power  that Job had achieved and NOT get the attention of the 'master thief,'  satan, himself. ( Please don't write me...I know his name is not capitalized, but I refuse to)
Job 1:

I believe that satan did not nonchalantly saunter up to the throne room of God and pull Job's name out of a hat. Job's life had both Heaven and Hell's attention. I believe that satan had a five year strategy plan to destroy Job. He well knew  the power of the blessing on this man's life, and its' ability to choke him out of any access to not only Job's life, but that of his family. The hedge around Job was infamous in the supernatural realm. All satan had in the meantime was 'time' to plot and plan.

He patiently waited for Job to float to the top of his success and ministry. He did not want just Job and his acid mouth wife, two old dogs, a mangy cat, and a moldy turtle. NO!!!! He wanted the best this man had and was going to have! Plus, Job was famous! You don't fall by yourself. satan was after not only his family and his personal wealth, but his friends and his influence.

As if things were not bad enough...his wife gave the hubby one heck of a tongue lashing , and suggested he not only throw in the towel, but curse God on the way out the door.  I often wonder about her response.
Why would she speak such a thing?  Number one, she obviously did not have the same relationship with God as her husband.  Number two, the bitterness of her loss gushed out of her mouth.
Job 2: 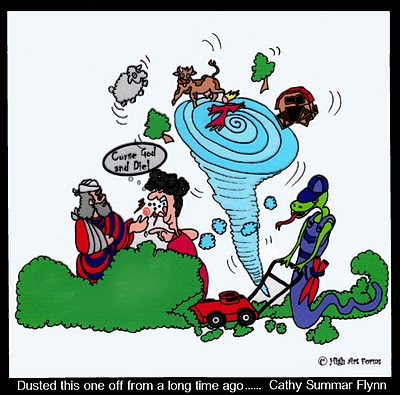 Together, Mr. & Mrs. Job had seven sons and three daughters. Job 1:19 says they were all together in the eldest brother's home. Job's children were virtually party animals and in a perpetual birthday celebration.

One, if not all, had their own homes and families. When the whirlwind came it not only destroyed entire households, but the ability to procreate Job's bloodline.  This was the greatest of ALL curses, and ultimately was what satan really desired to destroy. He has the inability to create and despises anyone or anything that produces life.

You don't have to trace this family root back very far to determine why Job felt the necessity to offer continual sacrifices and repentance for his children.  Job 1:5

Obviously, if you read the entire book, Job's sorrow and pain ultimately got the best of his mouth as well. It's interesting the very thing that had become an idol in the life of his children ( their birthdays ) was the very thing he cursed in his own life.  All of chapter 3 is a pretty gloomy description of how he viewed the day of his own birth, understandably written from the well of self-pity.

There are 42 chapters to this book.  Of all the intricate chapters there is none more challenging to me personally than these verses in Job 1:20-22.

22In all this Job sinned not nor charged God foolishly.

v. 20 Job's pain was so intense he had to tear something - the robe, being symbolic of his flesh. Job was a man of sacrifice so much so the word of God gives the Inventory Spreadsheet for the number of his livestock.
3He possessed 7,000 sheep, 3,000 camels, 500 yoke of oxen, 500 female donkeys, and a very great body of servants, so that this man was the greatest of all the men of the East.

There was no sending the servants for the sacrifice of the day... there were no more servants - nothing else external to sacrifice. At the point of Job's greatest, most desperate need he found himself stripped bare. The only sacrifice Job had left to offer was himself.......Selah....(Pause and Reflect) 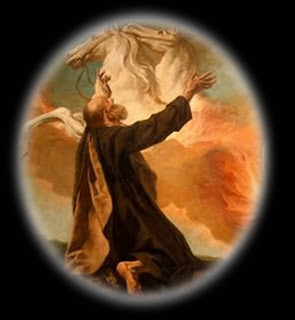