Soooo after a refreshing few days away and attending a wonderful Christian conference it's time for the Flynn's to return home and share their adventures.... of course!

It's time to go to beddie bye the first night of our stay. The room was wonderful! I knew it had been a long time since our last hotel stay, but I was in for a shock! You know the ole' sayin', "You can take the girl out of the country...but you can't take the country out of the girl."

I looked for the cords to close the curtains - there weren't any! In their place were long circular handles like you would see at the circus. You know.... the ones acrobats or athletes would use to accomplish their daring feats. 2 tired and feet 2 swollen 2 give it 2 much thought I maneuvered the three pairs of curtains and rings to get them closed - at least for the first night!

Our mini-vacation landed us in a beautiful, little historical city. Fifteen minutes from where his father lived for twenty-five years and is now buried.

In between conference meetings we dashed out for a quick lunch. There was a sign out front that promised all you can eat home cooked everything. Only one little problem....we were dining off-peak lunch time.  Everything we requested the waitress shook her head, "Nope." They were almost out of the home cooked  everything.  Very disappointed, we were trying to choose an alternative. A guy passed our table with piled-high  plates of food - enough for a small army. Now we knew why they were out of the home cooked everything.

Quickly running out of time we decided to have the home-made chicken salad with home-made potato salad. I only thought I had tasted every creative chicken salad recipe imaginable. Not yet! I DID recognize the plain white sliced bread, lettuce and tomato. The other stuff not so much.

On the other hand, the potato salad was out of this world!  It became almost embarrassing and was tempting to ask the Senior Citizens Bus Tour Group to turn their heads while we licked the bowls. 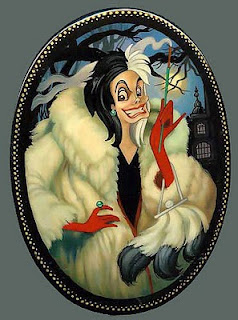 The bad chicken salad was worth it, because as we were scarfing down a home-made piece of chocolate peanut butter pie, a movie star walked in....Cruella Deville!  Imagine! You know the wicked character from "101 Dalmations?" My husband kicked me under the table.  I kept staring at her waiting for her to pull out her fur coat, elbow length gloves, her star spangled cigareeete holder, or at least a couple of puppies out of her pockets. The solid shock of white hair smack in the middle of a jet black bubble bouffant was all I had to go on.  Reluctantly, I left the restaurant without her autograph.:o( *I did not draw Cruella, although, I wish I had).

Between the long hours of driving, and sitting in the conference for a couple of days, by the time we headed back to our hotel room I looked like a walking, talking marshmallow. Everything was swollen!

I hobbled into the hotel room to tackle closing all those curtains, again. As I stood there studying those round rings I commented to my husband that they really did look like the things on a trapeze that you put your legs and feet in to swing in the air. 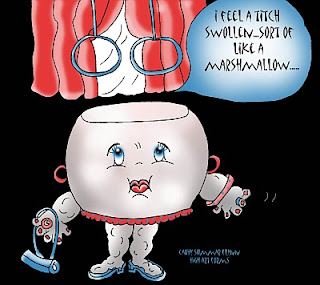 He never looked up from turning back the covers and said, "Don't even think about it...you're so swollen and all."  No need to comment, he was already snoring.

The conference was an amazing gift to us, but it was time to head home.  Ordinarily that would not be a big deal, but this meant at least one more meal on the road. So my husband made the executive decision since he still had a hankerin for something homemade.

We pulled off in - - - - -. We drove up and down the road  trying to decide which of the two places we were going to eat. My husband parked our SUV in the midst of all the pick-up trucks. The majority of trucks had camouflage fishing boats behind them.  I'm feeling pretty iffy. My husband says, "Hey, how bad can this be?  The sign says - - - -'s blesses America?"

It was pretty evident that we were the aliens among the locals. Too late to leave we had already been seen and the waitress was standing there. She looked like one of my grandmothers. Right over the table was the smeared list of the homemade specials of the day. Only one little problem....we were dining off-peak lunch time.

I told my husband I needed to go wash my hands. The restrooms were all but in the middle of the largest table in the restaurant.  The sign on the door said, "TURN REAL HARD."  If  I could hear all the people at the table that well.....hmmmmmm.

It was my husband's turn.  In the meantime, another local wandered in and joined a couple already seated.  He announced loudly that he was sorry he could not shake their hands because he had been spraying "SQUITO DOPE!" He continued...that 'SQUITO DOPE"  only ran em' off for a few days. My husband arrived back at the table and said his sign said, "STEP DOWN." 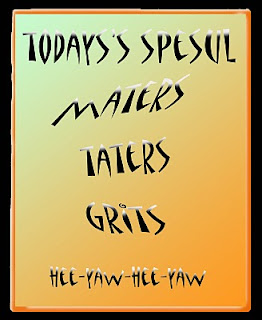 By now we had been served..V-E-R-R-RY scary. The waitress added a homemade blackberry cobbler to my special.  After the first bite I understood why she was giving it away. Being unsure of where the ribs had come from that I had ordered....I enjoyed the only thing  I could be sure of ...my drink. I watched grandmother pour it out of a can. The place continued to fill up with more and more camouflage.  That was our queue to go.

Swollen toes, still hungry, and everything - I waddled to our vehicle, my husband just shaking his head (again). Until the next  time we have the nerve to leave the house.