Tis' The Season for Produce....

Tis’ The Season for Produce….unless you have severe allergies or your name happens to be Cathy Flynn!


My episodes with produce are becoming almost iconic! (Please refer to former blog, “The Runaway Watermelon.” Clearly, I have some unresolved produce issues! I may be the only person that has been banned from that portion of the grocery store. That seems to be the department where most of my adventures begin, other than walking into the men’s restroom!!

THE TOMATOES I: My husband and I were in a hurry. To save time we divided our very short grocery list, simple, right? He was going to get his favorite cereal, and I was in charge of the tomatoes.

Now my husband is 6’2” and every stride makes up five of mine. I once saw a refrigerator magnet that describes me perfectly. It had a picture of a very fluffy lamb, and said, “Ewe’s not fat…Ewe’s just fluffy.” Enough said! The reason this information is pertinent to this story…my husband had fulfilled his part of the assignment in short order, and was headed my way…ready to go!

I was busy perusing the tomato bins to determine exactly which lucky gems were going home with the Flynn’s to adorn the top of their BLT. I was trying to make BIG decisions. Do I buy a bunch of little ones and cut them up – or the hothouse tomatoes that did not resemble anything I had ever eaten?

Deep in thought, because I needed to hurry, I heard someone saying just how much the cherry tomatoes had changed her husband’s life. I looked up and realized this very attractive lady was talking to me, all the while picking out the ripest packs. She continued…”You know, I married an older man, he is a lot older than I am.” She winked and said, “I mean a lot older. He owns his own business and works 60 hours a week. He is never sick, but must have his snack of cherry tomatoes every day!” WHO KNEW? “And, by the way, we are very wealthy and I have a new Jaguar parked out front. Just because we are rich…I still buy these tomatoes when they are on sale. His kids don’t really care for the tomatoes, but my husband gets grumpy if he doesn’t have his daily dose of tomatoes. He eats them like candy.”

Barely taking a breath, she gasped, “Everyone is jealous because I married him. We have a blended family, but no one likes tomatoes like my husband.” My head looks like a bobble-head doll glued to the back dashboard of a car, as I do not believe my ears. Now ‘MY’ husband, who is only two years older than I am, but maybe could use a couple of tomatoes, has arrived on the scene with the’ Breakfast of Champions’ in hand. 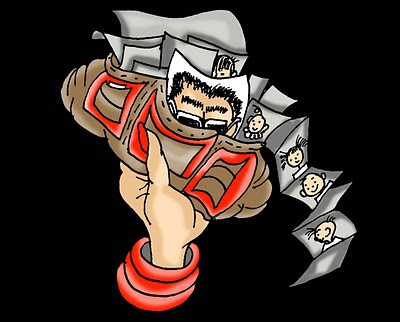 He arrives just in time to see my “new friend” pull out her wallet and with one vale swoop unfolds an entire fan of photographs (How did she fit all those in her purse and still lift it without a crane)? She is now pointing with a very long, newly manicured fingernail to the pictures of her very healthy older husband, and ALL of his children! As she is identifying them one by one and their ages, my husband is standing on one foot and then the other.
Once I was able to get a word in edgewise, I thanked her kindly for her advice and helpful information on the health benefits of the cherry tomatoes. Of course, I congratulated her on her new marriage -then my husband and I bolted for the door! My husband looked at me and said, “That lady seemed really glad to see you. Where do you know her from?” You would think by now – he would know better than to ask! 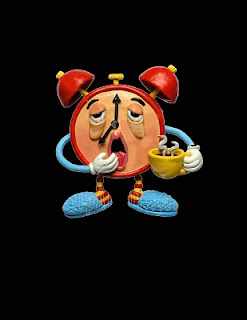 THE BANANAS: As we are unloading the umpteen loads of groceries, my husband is pilfering through the bags looking for his bananas. He has already planned his breakfast for the next morning. After being together almost 40 years, he has determined that it is much safer and healthier if I do not fix breakfast early in the morning! For both our sakes I do not venture past the coffee pot.

I buy bananas often, my husband doesn’t realize that it is possible to eat his cereal without them. Now, I consider myself as an experienced buyer of bananas. Chiquita and I are best friends. I should know if I bought bananas or not.

Down to the last bag, my husband looks very disappointed and says, “They are NOT here.” I know they are, and to prove a point I whip out the sales receipt. Proof! Three pounds of bananas @ $ .49 a pound. There is the receipt, but where are they? How many places can a banana hide? Even if you can’t see them, you can certainly smell them! We made multiple trips to the car, and searched under the table to no avail - Still no bananas today.

Exasperated, I called Wal-mart. It doesn’t take a rocket scientist to figure out they have mistakenly been left out of my bags. “No maam (amidst more than one snicker) there were no bananas turned in at the customer service desk.” We both gave up on the mystery of the missing bananas, and just went to bed. Fast-forward FOUR days. Did I mention that on the same shopping trip I also purchased the cutest flip-flops? I decided my new find would be the perfect complement to my outfit that day. I opened the closet door to be met with the most repugnant, but recognizable, odor. Could that be the smell of bananas wafting from my closet floor??? The answer is YES! I was laughing so hard my poor husband came to investigate the uproar. There they were…..of course, a sack of black bananas! I had been in such a hurry to get the groceries in that I had thrown the bananas in the closet with my new cutest flip-flops!

As usual, my husband was just standing there - shaking his head (again). He says, “I really don’t mind paying for them, but I would like to eat them!” Now if we are missing any produce or dairy products we check the closets first! LOL


THE CUCUMBERS: My least favorite thing to do is shop for groceries, and I was almost finished. Just a few bananas and I am through! HALLELUJAH!

I passed through the produce department just in time to see this older lady waving something green in her hand and over her head. She was talking to someone who appeared to be her son. His appearance was very impressive. He was immaculately dressed, with hands in pocket and a sweater casually draped around his shoulders. He could have been a model had he not been standing squarely in the middle of the local produce market perched between The Vidalia Onions and the Kumquats! Apparently, this dapper young man had brought his mother grocery shopping.

She said (without turning around), “Is this a squash?” Looking at me out of the corner of his eye he answered her, “I don’t know! You are the one that was raised on the farm!” Anyone who knows me very well knows that when I think something is funny….I laugh anywhere, any time!

Still laughing – I make the mad dash for the bananas. I watched in amazement as they quizzed other shoppers, plus the produce manager, over every purchase they made.


THE CANTALOUPE: We jump in the car to head to my husband’s latest doctor’s appointment. He wrinkles up his nose and says, “What’s that smell?” Oh dear…..I knew I was forgetting something! It would not be so bad if we were not experiencing a heat wave and it’s usually at least a 101 degrees in my SUV.

It really didn’t take much searching to determine the culprit. There lodged under the seat was the largest, mushiest cantaloupe you ever saw. So what’s the big deal? It was fine when I bought it. 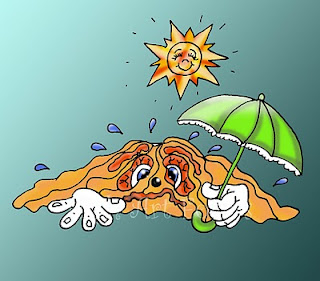 RECIPE TIP OF THE DAY: DO NOT (under any circumstances) leave unattended cantaloupe in the hot, hot car for more than four hours at a time. CAUTION – IT WILL BAKE! As the scrubbing bubbles say, “E-E-W-W-W!” 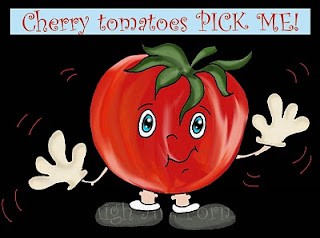 THE TOMATOES II: Once more, after recovering from my last tomato trauma, I was bravely going to shop again. With new found resolve, I was reaching for the only, barely ripe tomato in the entire store. I was interrupted to hear a voice say, “Put those back! They are expensive and no good!”
I turned around to discover one of the cutest little ole’ ladies I have ever seen. Although, she was shorter than I am, she spoke with great authority. “Honey, you need to buy these.” (Of course, the magic cherry tomatoes).
I was fascinated and completely forgot about the tomatoes! My new friend was color coordinated in her lavender ensemble, tan pumps, red fingernails and red lips to match, soft grey curls, and beautiful jewelry. This was my kind of girl, and I was very interested to know what she was saying. This little doll now had my undivided attention!

“I’m 93 and have just bowled two games. I bowl every week ya know. (No I didn’t) My sciatic nerve is actin’ up today, and I have been to the Chiropractor.” As she was reaching for two more containers of the cherry tomatoes, she continued… “My mother and sister lived to be 98.” She stopped in the middle of a sentence and waved me off, “Have a great day honey…bye.”

H-m-m-mI wonder if they sell these things by the case.

One of my favorite, former Pastors once told me that the Lord would give me ideas for witty inventions. I FINALLY HAVE IT! The Produce Department should have yellow tape and red lights. The produce should be marked with hazardous warning labels, built in GPS systems, expiration dates and alarms for people like me! I know there are personal shoppers for everything imaginable, maybe, just maybe, I should consider…