As many of you know, as my husband’s health declined, I closed the door on my Blog and my studio. It is my goal to end 2012 in a manner that would honor his life and belief in my dream. So here I am in a new location, a widow… nevertheless...BUT GOD.
I find it virtually impossible to step into a ‘NEW’ Year without reviewing the slide show that has been taking place in my heart these last several days. I have prayed, and asked others to join me, as I have pondered what my future looks like.

It feels as though the huge eraser of life swept through and erased people and relationships I was not prepared to let go of. My reaction wasn’t pretty to say the least.

I believe if I were to make a list of all the changes and challenges that have transpired during 2012 it would be staggering. In addition, the other list that would be staggering is my personal list of miracles. Simply put, there are no less than a bazillion.

Things I formerly soooo took for granted as being rated normal or average, for me, became miracles. It is amazing how your view becomes altered from the bottom with your mouth stuffed to overflowing with humble pie.

I believe that it is an inherent characteristic of human nature to believe that somehow as you gossip, fret, cry, rant, rave, walk the floor, and pray over the losses and failures of others…you are exempt. You must not compare your victories, even more, your losses. This is the height of arrogance and pride. You don’t intentionally feel this way, it is just a fact.

The last Women’s Meeting (where I ministered)  the title of my message was, “Giants Have Relatives.” Little did I know the impact those words would have in my own life.

How many times have I prayed Psalm 23 for others, and just last week that was a portion of the prayer a woman of God prayed for me.

This has been a year of more than one hard decision, and more often than not, I felt like the Lone Ranger. If you know me at all, if after praying, I sense I have the leading of the Lord I will proceed with or without a fan club. The ones you begin with are rarely the ones you end with.

Jesus  life was the perfect example. I surmise that there were more of Jesus followers than recorded. Often it is written they followed from afar. I believe they were secret believers in total agreement of His ministry and choices. They just could not withstand the fire and peer pressure that surrounded His life. Although, I certainly am not comparing myself to Jesus, it is His model that gives me strength. 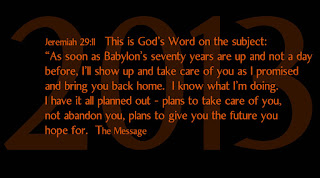 The sure thing I know about the upcoming year is the same thing I need to remember concerning however many years have been granted to me.

I still have a dream that needs to be fulfilled!