I would like to welcome you back on this Memorial Holiday week-end.

Originally, my husband and I are from Memphis, Tennessee. In the early days of our marriage, we thought we were serving God. It was the best we knew how, which I might add, was not so hot.


Neither of us had much of a role model in terms of active Christian upbringing in our immediate home environments. My saving grace were the summers I spent in a small rural town with my grandparents and "aunties". Serving God and going to church was on the forefront of their agenda. Going to Sunday church was not an option. Plus, I loved it! I felt like a celebrity!

My Grandfather led the music for Union Methodist Church for 50+years. On occasion, my cousin ( the blonde) and I would sing a duet, "The Old Rugged Cross" from the well-worn hymnals. Actually, she could carry a tune and I just howled as the pianist banged out the melody. This is hysterical, since I do not even sing "Happy Birthday" even to my closest loved ones (based on an actual request). To put it bluntly, I Have ZERO, I repeat ZERO musical ability. In grade school I excelled in speed reading, but made the lowest score in Willow Oak's history in musical aptitude.


More than anything...when the preacher or Sunday School Teacher would talk about Jesus it would make me tingle all over. I loved sitting on the polished wooden pews, in awe of the arched ceiling, and admiring each stained glass window. I was curious about the engraved names. Who were these people, and who were these people that loved their relatives enough to honor them in this manner?


I loved the tangible feeling of God's presence. I especially loved the pomp and splendor of the Holiday sermons. The artist in me adored any addition of plastic flowers to commemorate each special occasion.


My husband and his family joined the Episcopal church when he was ten. He said the closest resemblance of his family being Christian in their beliefs was their huge white Bible covered in the original plastic and placed in the middle of the coffee table. He said it was only dusted off on special occasions - either to add the most recent  photograph or another birth/death certificate. He still remembers the sound of the plastic cracking when it was opened.


We both both knew we needed to go to church somewhere. So as options were eliminated, we decided to attend the small, but cherished, Episcopal church in the heart of midtown Memphis.


The only thing we knew was; this was the church his mother attended before her death, it was NOT convenient to our home, and it was considered a "high church". Wooooaaahhh - what did that mean?


We gathered our little family and attended our first service. As I slid into the polished wooden pews, in awe of the arched ceiling, and admiring each stained glass window. I was curious about the engraved names. Who were these people, and who were these people that loved their relatives enough to honor them in this manner?


We were very conspicuous.  There was no hiding the fact that we were newbies.  We looked like we were dancing off-beat to a tune that everyone else knew well, but us - bowing, kneeling, chanting. I loved the tangible feeling of God's presence. Strangely, I felt at home.


The first service was not without drama. I nearly passed out and was nauseous from the incense. I felt a bit terrified as the priest, and his entourage prepared to enter the service dressed in all of the formal regalia along with the altar boys carrying the cross. I did settle in a bit- because after all, I did know the words to the "Lord's Prayer."


At the end of the service we were met by one of the Godliest, friendliest, loving couples I had ever encountered. They introduced themselves as Father Sykes and Rosemary. It was mutual love at first sight.


Over the next few months, this couple began to disciple us, and include us in every church function. Father's Sykes' wife, Rosemary, discovered that I had some artistic talent, and they desperately needed help preparing for their upcoming Fall Church Bazaar. I was hired!


I about hurt myself volunteering, heading up, and decorating for every
extracurricular activity. I was like a mad woman in the land of unused talents and abilities!  I arranged to have their entire Sunday School Department walls painted and then I added age appropriate murals on each wall. No white space was safe from the decorating duo! The two of us became hooked at the paintbrush and glue gun. We were inseparable! We laughed and laughed and laughed...until one day...


Father Sykes and Rosemary were hosting the most important event of the church year at their parsonage. Not only did I help Rosemary scrub every nook and cranny of their house, but she invited me to prepare my world famous secret recipe deviled eggs and SERVE THEM!


Visiting Priests and their wives would be attending this luncheon from all areas of the country. There was a tremendous amount of pressure for things to be perfect. Linens, fresh cut flowers, fine china, crystal, and my secret recipe deviled eggs. Could life get any better? Exhausted, but satisfied, everything was in its place.


The guests were ooohhing and aahhing over every minute detail. They had gathered around the buffet tables - tasting and admiring our fare. My dish was included with the top notch cooks of the church. M-m-m-m...The men and women alike commented on just how perfectly each deviled egg was sliced in a uniform fashion, and were licking their fingers.


Finally, one very prim and proper lady asked me for the details of preparation and the recipe. I couldn't believe it! She wanted MY recipe! I had everyone's attention NOW. 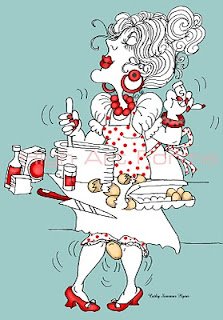 Step by step I was rehearsing in my head...after all, this was not the first time I had prepared these silly eggs. I knew the secret to removing the egg shells without tearing the outside of the egg was to crack them- then briskly roll them between the PALMS of your HANDS.  How hard could that be? So with head held high, (probably one of the proudest moments of my life) I began... "The secret is.... after you cool the eggs to a certain temperature - you crack them and then simply..... ROLL THEM BRISKLY BETWEEN     YOUR LEGS!"


OMG! I'm not sure what an out of body experience is - but, I think I had one! I saw this lady that strangely resembled ME! I could tell she was thinking one thing - but saying another! She was very, very pink and looked like she was about to faint!


Father Sykes, being of Swedish descent with blonde hair and sky blue eyes, was now glowing like a red hot thermometer! It was anyone's guess as to which of their guests would pass out first! Several of the ladies nearly choked!


The last thing I remember was Rosemary choking back tears and hysterical laughter! Being in the ministry did not make  her exempt from snorting when she laughed.


What happened next I couldn't tell you. All I can say, is that no one, but no one, says it better than my  childhood friend....SNAGGLEPUSS! " HEAVENS TO MURGATROYD ! EXIT GRACEFULLY - STAGE LEFT."

This video is a few minutes long, but well worth the extra time it takes to watch.  Perhaps it will bring back a fond memory or cause you to giggle out-loud.  Go ahead, no one is around to hear you SNORT! Please enjoy! PRESS  THE  PLAY  BUTTON.

In the midst of family celebrations, we want to honor the memories of  our fallen Veterans and their families.
t-t-f-n (ta-ta-for now)